It's so interesting how some patterns just seem to flow off the needles, every stitch falling into place easily.  Japan Sleeves by Joji Locatelli is a pattern that is doing that for me.  I am having so much fun knitting this pattern that I resent being tired and having to put the needles down to go to bed.  I just want to keep knitting.  I can't wait to see what's next.


Then there are those patterns, that for whatever reason, create a challenge from start to finish. This was the case for me when knitting a shawl for my lovely sister-in-law's birthday. I had planned to knit the shawl pattern, Algiers by Kirsten Kapur, a pattern that I had knit before.  I chose to knit it in Madelinetosh Tosh Merino Light in a beautiful colourway called Coquette.  To me it was the perfect combination of pattern, colour and yarn.  As I tried to knit this pattern during a very busy work month I ended up ripping it out three times. This was due mainly to losing focus on the lace pattern and making silly mistakes.  I gave up and tried a simpler pattern and still I was making errors.  I ripped that attempt out and once things started calming down on the work front I retried Algiers and this time was able to do it.  Lesson learned...stay away from knitting complicated patterns when you are busy elsewhere. 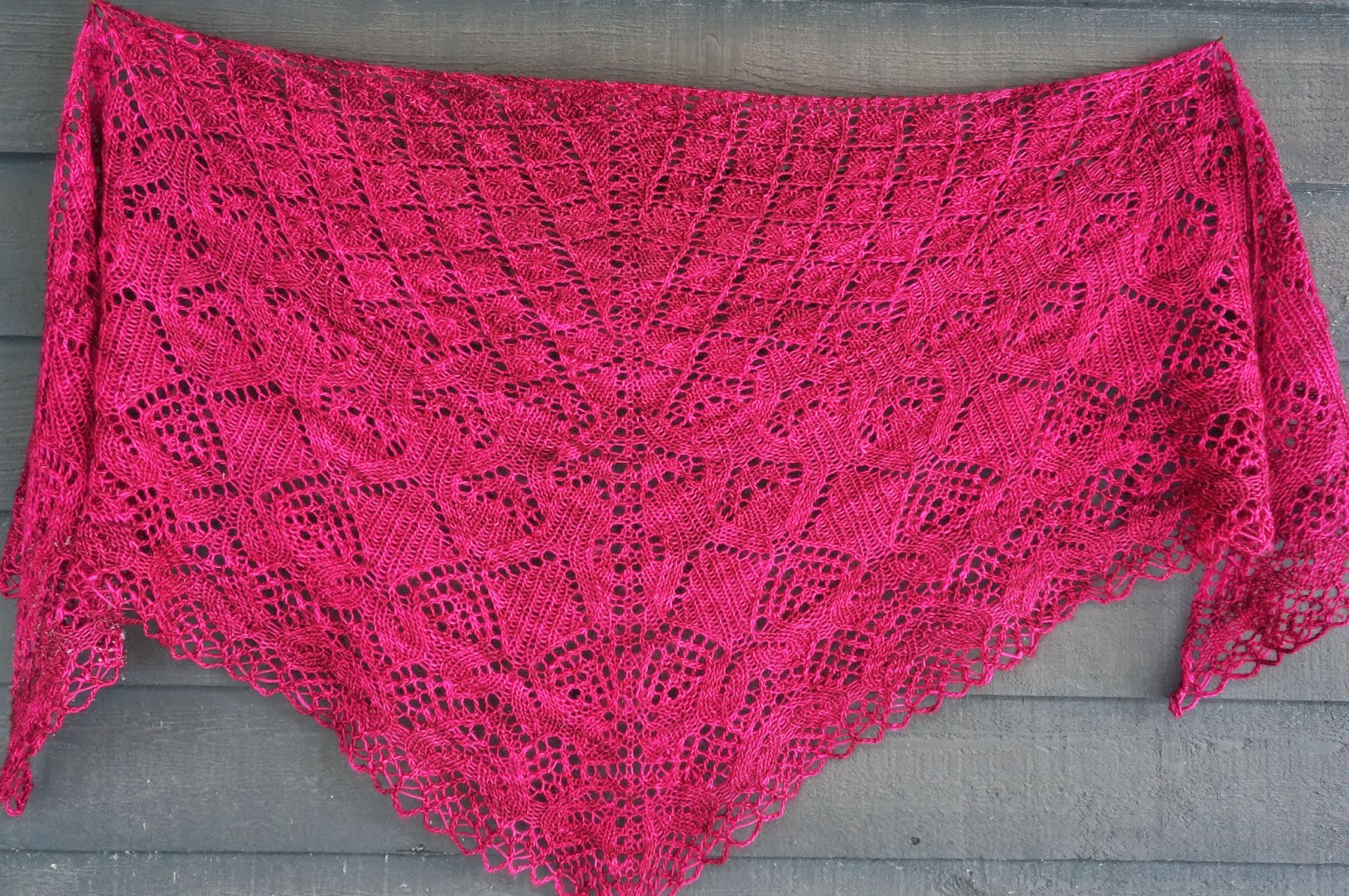 Despite all the frustration I am glad I persisted because I am very happy with how it turned out. 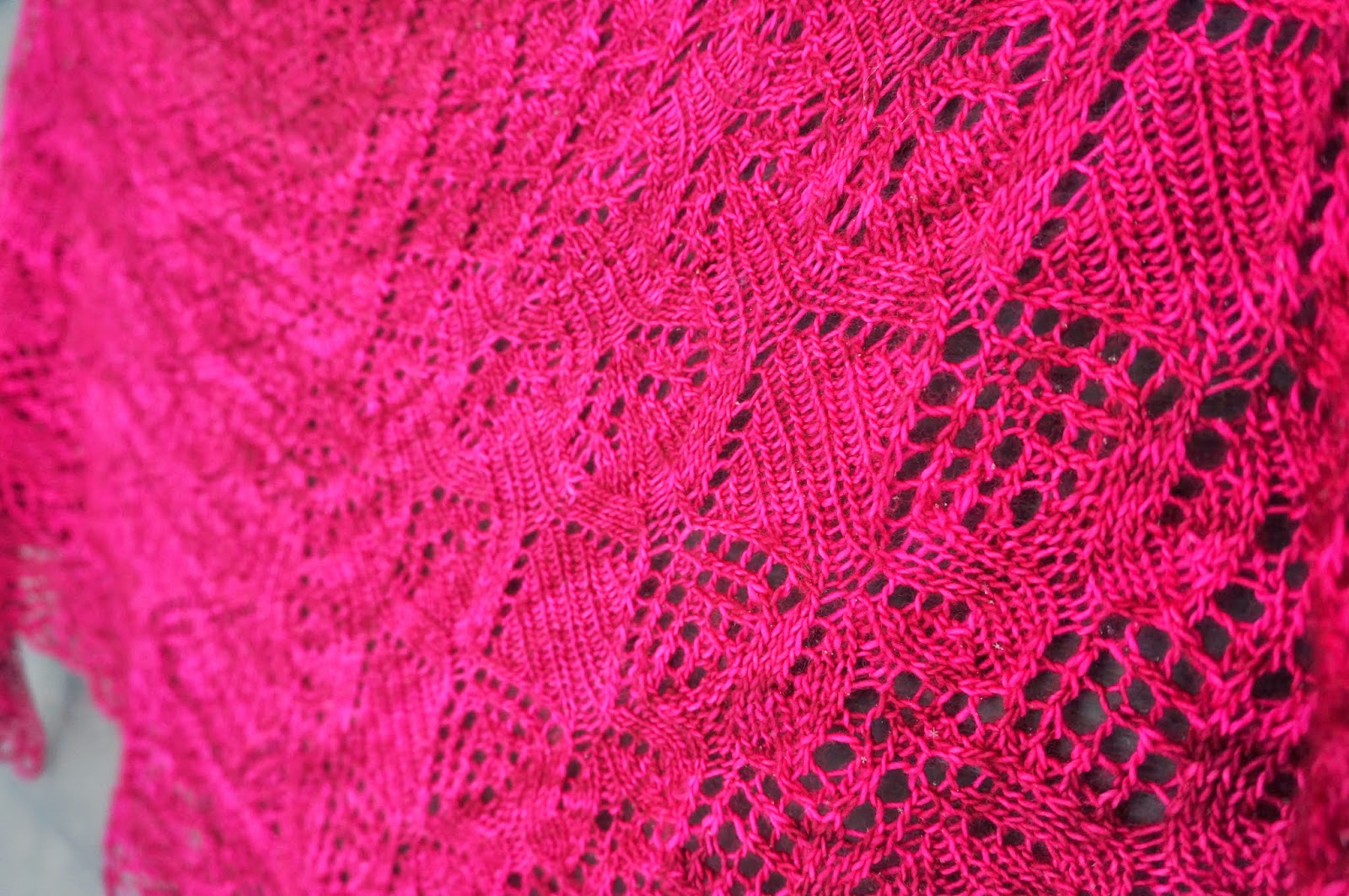 Coquette is a beautiful shade of pink with a very slight variegation which was hard to pick up on camera.  Luckily I had bought a couple skeins of this yarn because Tosh Merino Light does not like to be ripped out three times.  It became quite fuzzy and fortunately I had enough yarn that I did not have to reuse the yarn that been ripped out.  However, going forward, if I am going to do a complicated pattern again I think I would use another yarn. 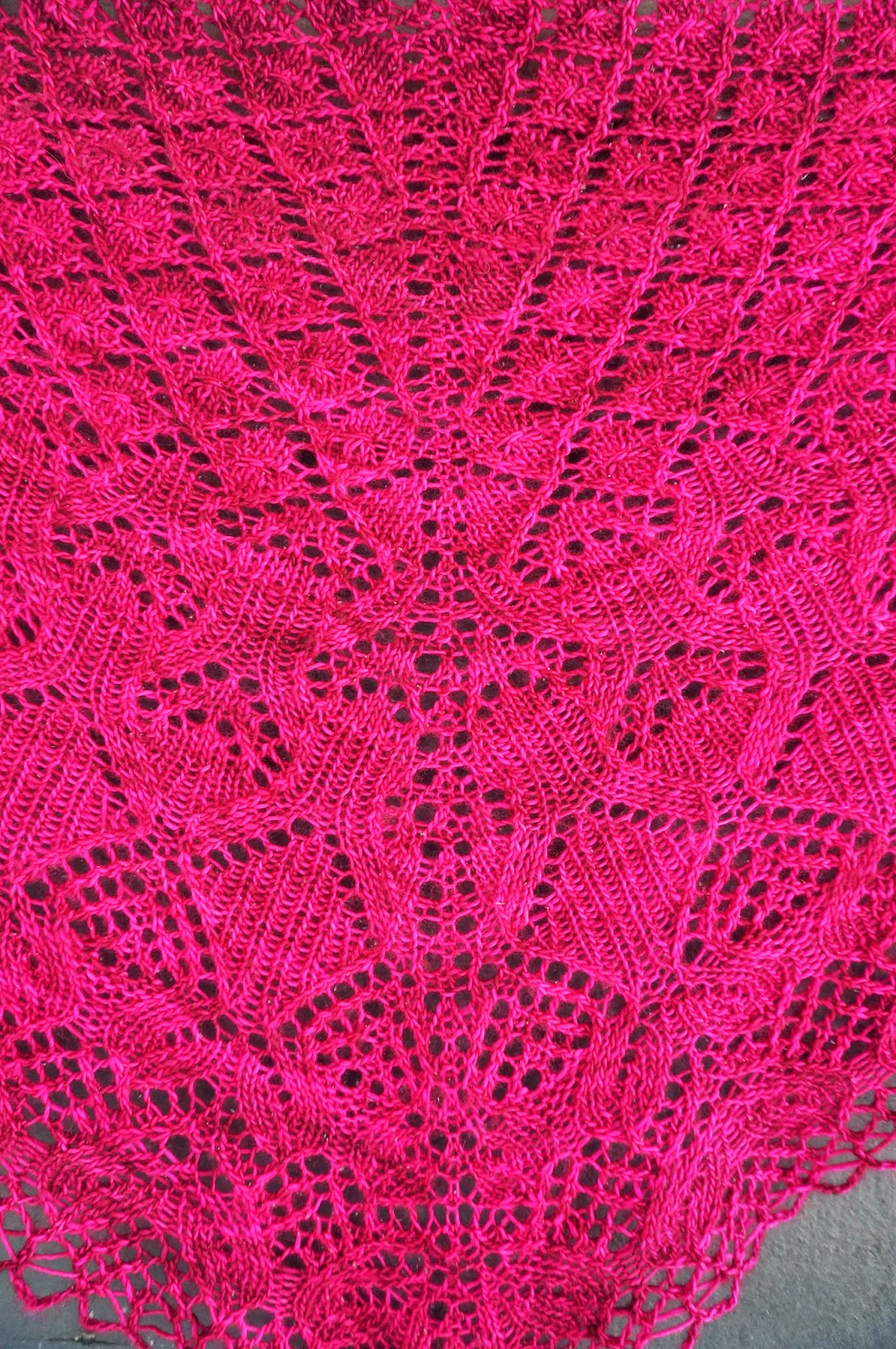 As always I found blocking to be a miraculous thing, as the two pictures below show you before and after shots.  Tosh Merino Light really grows and blocks beautifully.  Despite my difficulties this is a well written pattern that creates a wonderful result.  There are both charts and written directions.  Don't let my adventures with this pattern prevent you from checking it out.


Have a great week!  Hopefully things will start thawing out around here.  I am ready for spring.  How about you?

The Joy of Knitting: Japan Sleeves

Every now and again I choose a pattern that once I start knitting I cannot put down.  I don't always know ahead which pattern will create this excitement.  It could be caused by the yarn I am using, the unique construction of the pattern, learning a new technique, or a combination of the above.  I haven't been this excited about a pattern's construction since I knit Hitofude by Hiroko Fukatsu.

However, it is the colours, a discontinued colour called Teddy Bear, and a very pale pink called Molly Ringwald, that has brought me much joy and the feeling that spring is not very far off (now that is saying something as it is -25 degrees Celsius feeling like -34 degrees Celsius at the moment).  But it is the combination of the yarn colours and the pattern that has my heart singing...the construction is something that I have never done before and I can hardly wait to see what will happen next. 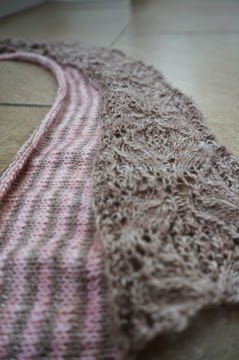 The first part of the pattern are the lace panels on the sleeves. When I started this section I was working on a few other knitted projects at the same time.  I promised myself that I would knit a few rows a day, knitting both panels at once. My lace knitting skills are still something that I am working on, but the beauty with these lace panels is that they are only 25 stitches wide, so errors are easy to find and correct.  The finishing of these lace panels coincided with the end of the other knitted projects I was working on.  Now I can focus all my knitting energy on this sweater. 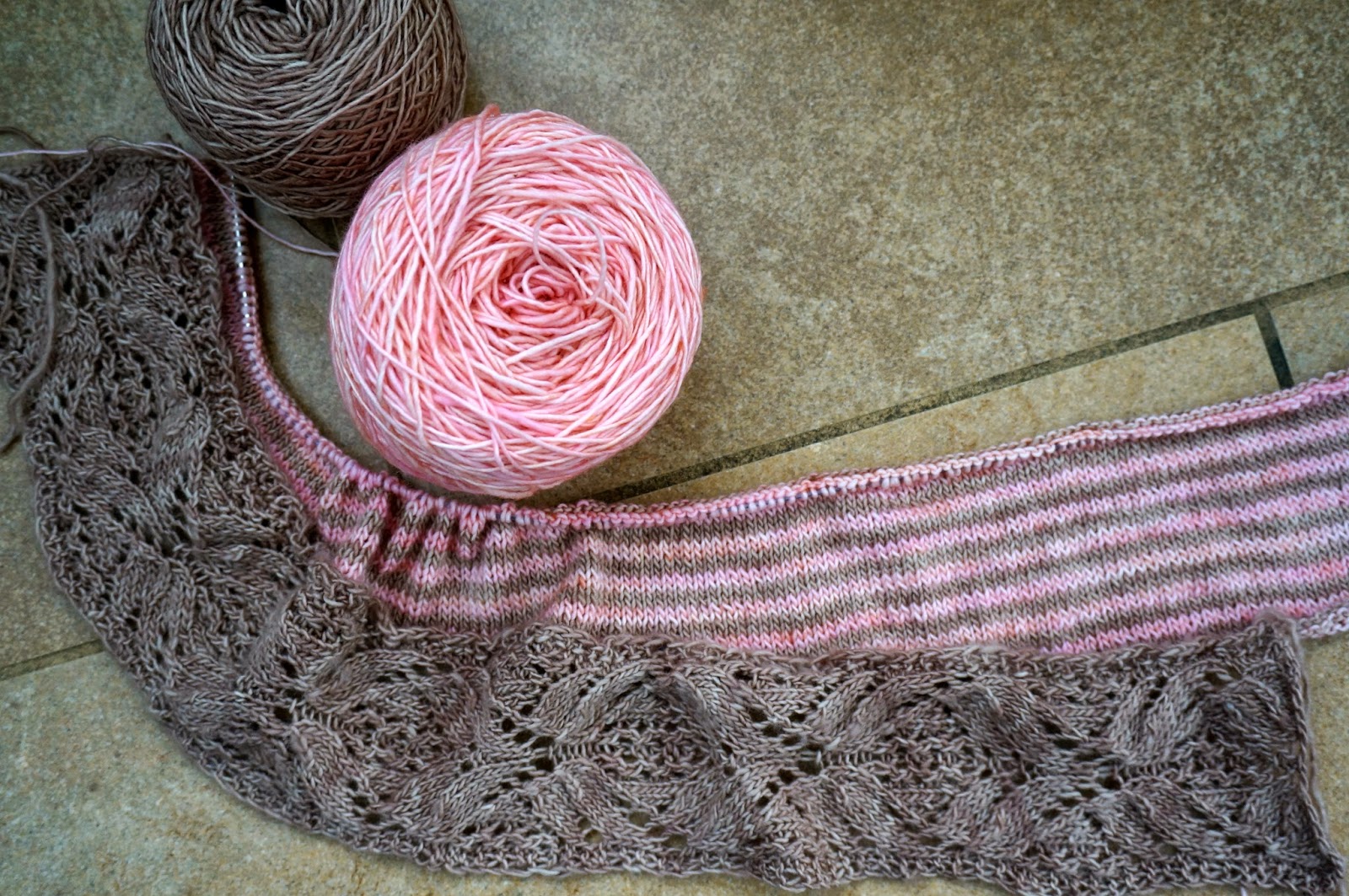 The real magic occured when I picked up the stitches on the lace panels and cast on some stitches in between, creating the sleeves and the shoulder shaping.  As any good knitter knows, knitting sleeves are something that can become a chore.  If a pattern is knit in pieces some knitters choose to knit the sleeves first to get them over with.  Other knitters like myself can't wait to do the body of the sweater first, and then later regret that decision when the sleeves take forever to complete.  But the beauty of this pattern is you work on both sleeves at the start in a very interesting way.  And if you love your chosen combination of colours as I do, it is so much fun to see the stripes emerge.  The bonus is before you know it the sleeves are done!

Knitting a fingering weight sweater is a big time commitment. The key is to pick a pattern that is so much fun to do, keeps you guessing what will come next, and teaches you some new skills.  This pattern fits the bill for me.  Isn't that the beauty of knitting?  There are so many things to learn even if you are an experienced knitter.  If you have not seen this pattern before you must check it out. This is the first time I have knitted a pattern by Joji Locatelli but I can tell you already it won't be my last.  I shall keep you posted about my progress. 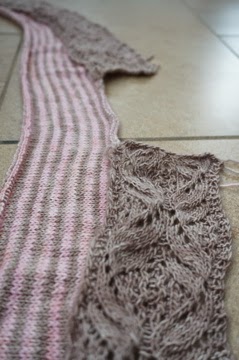 Another pattern that this designer has just published in Pom Pom Quarterly, Issue 12:  Spring 2015 is a hat called Vitsippa.  The stranded colourwork pattern is so original... I really have not seen anything like it.  As soon as I get my hands on the pattern I will definitely be knitting it.  Check it out!

What knitting pattern has you excited?
Posted by Christine at 11:07 AM 1 comment: